GHOST IN THE MACHINE? 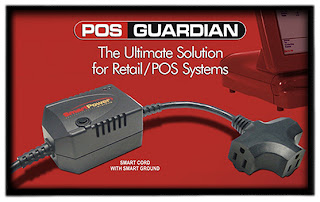 Could 'dirty power' be causing you computer problems?
When people think of preventing data loss due to power supply problems, they typically consider an uninterruptible power supply (UPS) or a surge suppressor. Recent studies by Bell Laboratories,however, indicate that less that 4 percent of power related problems would be addressed by such devices. Thus even networks and computer systems that are well protected by UPS and surge protectors are at serious risk.
The 3rd Generation of Smart TBF™ (Transformer Based Filter). It is equipped with Patent Pending "SMART GROUND" technology protection for network systems and ground loop current.POS GUARDIAN is a combination of Patented TBF™ and "SMART GROUND" Technology. It provides controlled ground and exceeds the performance of an Isolation Transformer at a fraction of the cost. · POS Guardian protects Retail/POS systems against the most severe spikes and surges· Increase reliability of POS systems, computers, cash registers, kiosk systems by filtering the noises on ground to less than 0.5 Volts· Line Monitor Indicator helps technicians from connecting copiers to faulty circuits· POS Guardian gives the maximum reduction in service calls· Exclusive POVP™ (Prolonged Over Voltage Protector) protects connected equipment against prolonged over voltage by disconnecting the equipment· Smart Technology - Reverse polarity/No ground detection and shutdown· LIFETIME WARRANTY Digital Power conditioners... · REDUCE Downtime · REDUCE Error Codes · REDUCE Frozen Screens · REDUCE "No Problem Found" Service Calls

Downtime causes millions of dollars in damage annually to computer networks around the globe. In many cases, people attempting to troubleshoot the cause of downtime waste hours addressing the wrong problem. They blame the software, the network, viruses, spyware, and a host of other causes. Sometimes they are correct. Often, however, they are correcting the wrong problem. Power-related issues, it turns out, are frequently the cause of time-outs, unexplained downtime and other commonplace system or networking glitches. Recent studies by Bell Labs and IBM agreed that around 80 to 90 percent of the time, electronic equipment is being affected by tiny surges as opposed to lightning flashes or blackouts. To make matters worse, these little spikes wreak havoc in the form of logic confusion, system errors, and frozen screens. "Everyone has had their computer lock up on them," says Anthony Loguidice, assistant vice president of service for Sharp Electronics of Canada Ltd. "If there's spikes and surges on the line it can cause quality issues and a lot of odd problems."

We have created this Blog to give our friends, customers and business associates a way of staying current with many of the topics in POS or Point of Sale for short. Please subscribe and leave your comments for others to share.

ACT-POS
A full service technology company for Point of Sale professionals in the retail and hospitality industries.